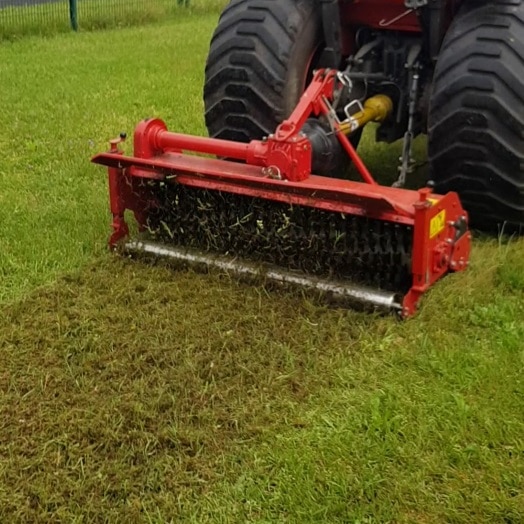 DETHATCHING, SCARIFICATION,
SPIKING AND ROLLING WITH ONE MACHINE!

Our machine allows you to carry out 4 different actions on your land: Sanitize your soil to the desired depth (during dethatching or scarification). Use the machine, without coupling to PTO for aeration action (spiking). The rolling effect of the rear roller closes your actions.

Our exclusive system for attaching knives to the rotor allows a change of cutting tools in less than 1h30 (*). Each knife is placed independently on the rotor. These are then clamped by a single nut located at the end of the shaft. Vary the position and/or type of knives according to your operating conditions! 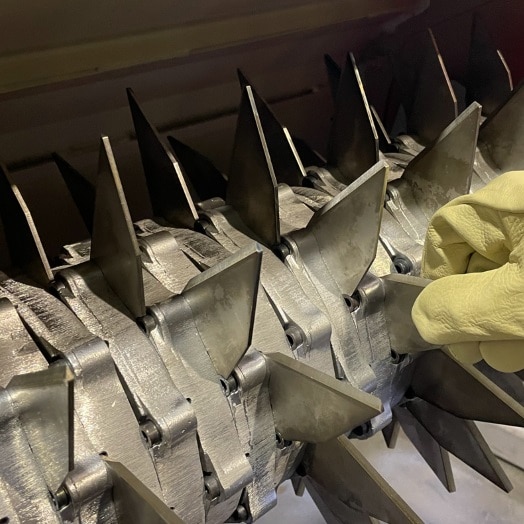 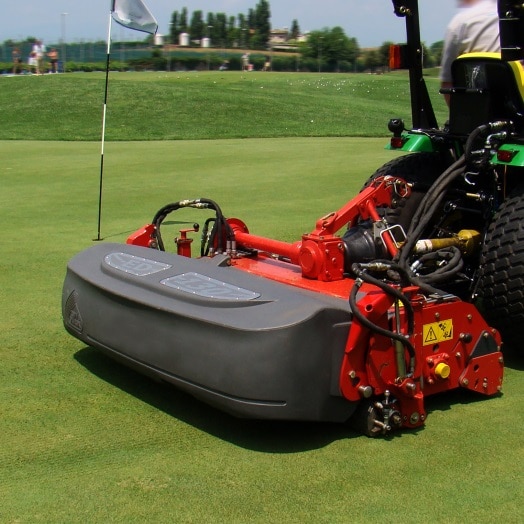 DETHATCH YOUR GREENS IN ONE PASS:

Our machine makes it possible to carry out in one pass the dethatch of a green: the extracted material is then collected in the collection tray. No need to use a vacuum cleaner to start collecting, the floor is brushed and waste collected, even in the case of morning operations. Your golf course remains available!

See our other ranges

more details on the model 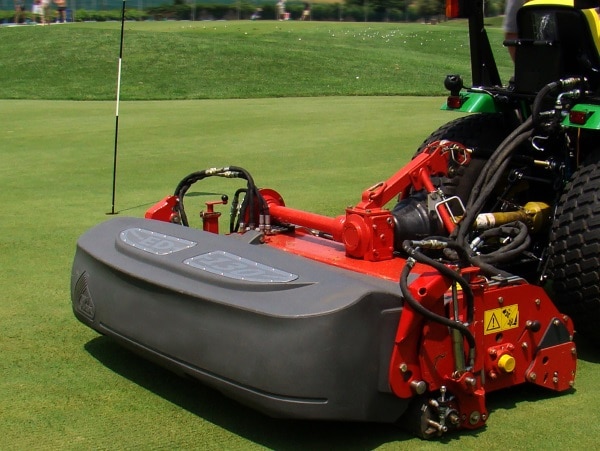 Dethatching is essential for the maintenance of your lawn, grass and other surfaces. The accumulation of organic debris on the surface of the soil leads to felt formation, which prevents the grass from breathing, water to circulate freely, thus promoting cryptogamic diseases. The dethatching machine is the most effective tool to remove the accumulation of this layer on your lawns.

The Rotadairon® dethatching machine DS 130 and DS 180 can perform 4 different actions on your lawns:

Whatever the nature of your terrain, the Rotadairon® dethatching machine DS 130 and DS 180 have been specially designed to adapt it. Equipped with a single roller at the front, the basic version allows the DS130 and DS180 to dethatch a large flat surface type such as a sports field. For better maintenance and monitoring of the terrain, a second roller (option 1) can be added to the rear, offering a better quality dethatching. For uneven and hilly terrain, the swing kit (option 2) offers perfect flexibility in the operation. The profile of the ground is precisely monitored, allowing a high-quality dethatching on hilly golf courses. Requiring the second roller, the swing kit benefits from increased stability during operation.

Our range of Spikers Dethatchers allows you to carry out dethatching or aeration operations on all your grounds, whatever their nature.

3 variants are available to you to carry out all your work :

So whether you want to dethatch a football field, or a golf course or a grassy area, we now have a complete solution to offer to you.

The Rotadairon® dethatching machine ED 130 TS is mainly dedicated to Golf Green dethatching operations and performs 6 different operations: dethatching, verticutting, spiking (scarification), rolling but also sweeping to remove the material that remains on the ground on your lawn. It straightens the grass as well as collecting the felt in a 180-litre hydraulic discharge bin. No need to use a mower to pick up waste on your Greens!

The exclusive system of knives fixing to the rotor allows a quick change (in 1h30!) and without any effort of the cutting tools. Each knife is placed independently on the rotor, so to vary their positioning and model. Rotadairon offers 3 types of knives depending on your operating conditions: sharp, not sharp, carbide.

In order to keep a sublimated looking turf, the dethatching/scarification operation should be repeated at least twice a year in spring and September (under common temperate climate conditions) or during active growing season

If you want a healthy and beautiful lawn, choose the Rotadairon® dethatching machine DS 130 or 180. The ED are particularly suitable for dethatching the sports fields and golf courses.

For an even better result on your greens, choose for the Rotadairon® dethatching machine ED 130 TS model with pick-up bin! In a single pass it provides dethatching and the pickup, of a golf green. No need to use an air blower to blow the cutting residues, the ground is brushed and waste collected, even during morning operations.

Find out more about our entire product range for the building and maintenance of green spaces!

See our other ranges

Select the fields to be shown. Others will be hidden. Drag and drop to rearrange the order.
Click outside to hide the compare bar
Compare
0
0
Your basket
Your Cart is currently empty.Shop
Continue